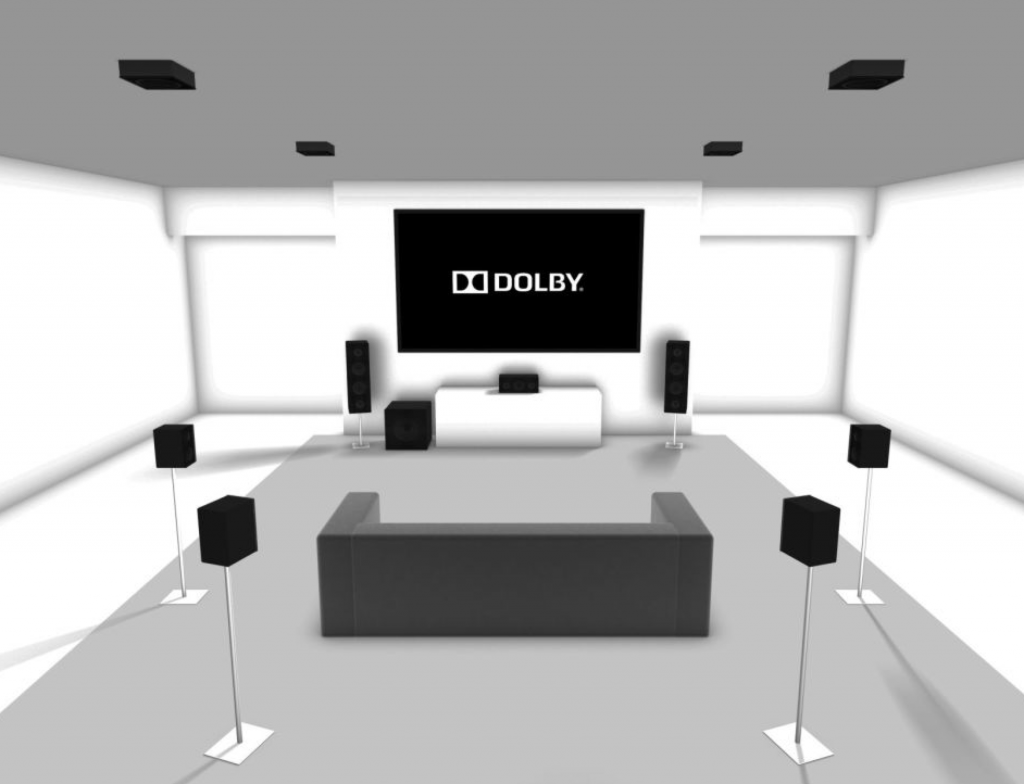 Android users to enjoy Google Play movies in cinema-quality surround sound at home or while on the go.

Google and Fraunhofer IIS deliver the first movies with a true 5.1 channel surround sound experience from Google Play. The immersive sound quality consumers have come to expect from TV, Blu-ray disc or DVD is now available with movies streamed or downloaded from Google Play directly to their Android devices running 4.1 or later. Google chose HE-AAC Multichannel as Android’s only surround sound codec due to its open-standard nature and excellent bit-rate efficiency.

When connected to a surround sound system and TV with an HDMI cable, Android users will be able to play high quality audio and video from their smartphones and tablets in surround. On the go, Android devices will play movies in great stereo quality and selected Nexus products will also include the Fraunhofer Cingo virtual surround rendering technology, which will play movies in realistic surround sound on earphones or tablet stereo speakers.

Android’s HE-AAC Multichannel implementation includes full support for loudness and downmix metadata commonly known from the broadcast TV world, as well as other features that allow the sound to be tailored for an optimum user experience in any listening mode and environment.

“Google Play movies in 5.1 HE-AAC Multichannel sound are the first realization of our vision of bringing true theatrical surround sound to mobile devices,” said Robert Bleidt, Division General Manager at Fraunhofer USA Digital Media Technologies. “The Google and Fraunhofer partnership creates a tremendous value for consumers by offering one format that delivers a high quality experience both in-home and while mobile. Consumers may experience surround sound over headphones while on their way home from work, and finish the movie in true, exciting surround in their living room,” he added.

HE-AAC Multichannel is part of the Fraunhofer FDK AAC codec library for Android since version 4.1 and a required feature of all Android-compatible devices. This software makes open-source Fraunhofer implementations of the MPEG audio codecs AAC, HE-AAC, HE-AACv2, and AAC-ELD available to the Android community.

HE-AAC is today’s most efficient high-quality surround and stereo audio codec deployed in over 5 billion devices and used in TV, radio, and streaming services worldwide. The codec is natively integrated into most operating systems, streaming platforms and consumer electronics devices. In addition to its unique coding efficiency, HE-AAC has the dynamic ability to change audio bit-rates seamlessly in order to adapt to changing network conditions as consumers stream content to a variety of devices. It can be used with any adaptive streaming technology including MPEG-DASH, Apple HLS, Adobe HDS and Microsoft Smooth Streaming.

Starting with « Rise of the Guardians, » DWA plans to mix all upcoming animated features in Barco’s Auro 11.1 sound format.

Dreamworks Animation gave Barco’s new Auro 11.1 3D sound format a big endorsement on Thursday, revealing plans to mix all upcoming animated features in the format, starting with the Nov. 21 release of Rise of the Guardians.

“We believe that Barco’s 3D sound technology will serve to immerse audiences around the world even more deeply into the adventure-filled world created by our filmmakers,” said Jeffrey Katzenberg, CEO of DWA, in a released statement. “After considering numerous sound formats currently available, we are convinced that Barco Auro 11.1 offers the best cinematic experience available to envelop audiences with astonishingly lifelike sound. We believe that Barco is uniquely capable of providing a premium cinema experience.”

Auro 11.1 uses 11 channels of sound plus a subwoofer to create an immersive sound experience. The Auro mix for Rise of the Guardians was completed in an 11.1 supported suite at The Dub Stage in Burbank led by Oscar winner Andy Nelson and Jim Bolt, re-recording mixers; and three-time Oscar winner Richard King, sound designer and supervising sound editor.
“In the digital world we are living in today, we have access to many new technologies – such as higher frame rates, 3D or other visual technologies – that help us tell our story better. And sound technology is vitally important to us as well,” said Jim Bershears, DWA’s vp of postproduction, in a released statement. “As we follow the current sound technology developments closely, we believe that Barco’s sound technology stands apart as the only system that we can implement easily with our current workflows and still achieve a premium acoustic experience. What really differentiates the Barco Auro 11.1 format from other sound technologies is that it enables us to place aural objects around the auditorium to envelope the audience with the rich acoustic spaces that we create virtually.”
Barco reported that there are plans to bring Auro capabilities to the Campanile theater and a dub stage on DWA’s Glendale campus, as well as to a screening room at PDI/Dreamworks in Redwood City.
Auro 11.1 is installed in roughly 45 theaters worldwide including two in the Los Angeles area (Pacific’s The Grove Stadium 14 and Edwards Grand Palace Stadium 6 in Calabasas). Theaters that will be showing Rise of the Guardians have not been confirmed.
Rise of the Guardians will be additionally be offered in Atmos, Dolby’s new sound format.

Dolby Laboratories has acquired rival digital cinema sound technology company IMM Sound, a privately owned Barcelona-based business, in a move that Dolby believes will help to speed adoption of its new immersive Atmos sound format. The financial terms of the deal were not disclosed.

Dolby and IMM are among a handful of companies that have been aiming to launch the next generation of digital cinema sound — though Dolby fired the most high-profile shot to date with the recent launch of Atmos.

“IMM Sound was the company that had something similar to what Dolby was doing,” Dolby senior vp cinema Doug Darrow toldThe Hollywood Reporter. “We thought if we combine forces, it could allow for more rapid adoption.”

In the broad sense, both systems involve immersing the audience in an aural experience by placing speakers around the perimeter of an auditorium, as well as on the ceiling. And both offer tools for sound facilities that would enable more sophisticated sound mixes with the notion of placing “objects” versus “channels.” Darrow toldTHR that while similar, there are no issues of patent overlap and that the developments are “complementary from a technology standpoint.”

Darrow said the IMM Sound brand will be discontinued and IMM technology would be used to further develop Atmos. “IMM has some enhancements around reverberation and some subtle audio effects in a theater playout system that we haven’t got to yet,” Darrow cited as an example.

The IMM office and development team will remain in Barcelona, and in time, the roughly 40 IMM-equipped theaters in Europe will become Atmos-ready theaters.

Previously announced as an IMM Sound release is director Juan Antonio Bayona’s upcoming dramaThe Impossible, which stars Ewan McGregor and Naomi Watts and re-creates the tsunami that hit the coastlines of Thailand in December 2004. It is not yet decided if The Impossible, which Summit Entertainment will distribute in the U.S., will be released with IMM Sound or an Atmos sound mix.

Atmos — which can accommodate as many as 128 channels, or what Dolby now refers to as simultaneous sound elements or objects — launched for a global audience last month after it was installed in the newly named Dolby Theatre in Hollywood and was used for the first time for the premiere of Disney/Pixar’sBrave at the theater’s grand opening.

About 20 theaters worldwide already have been announced as Atmos sites, and 14 of them, including the El Capitan in Hollywood, participated in Brave‘s Atmos trial. Darrow expects the release of up to three more Atmos-mixed movies this year.

“We’d like to see about 1,000 [Atmos] screens next year, worldwide,” Darrow said, adding that by combining IMM and Dolby technology, Atmos might emerge as a sort of de facto standard. “In order to achieve that and to make the industry more unified we though this [acquisition] was the right thing to do.”

Others vying for the digital cinema sound market is Barco, whose Auro 11.1 uses 11 channels of sound plus a subwoofer and has a few dozen installations worldwide, including Edwards Grand Palace Stadium 6 in Calabasas, Calif. The first Auro 11.1 release was George Lucas-produced Red Tails, which opened in January.

Iosono, a spinoff company of Germany’s Fraunhofer Institute for Digital Media Technology, introduced the first installation of its immersive sound system at Mann’s Chinese 6 Theater in Hollywood during the 2008 Society of Motion Picture and Television Engineers Convention.

For all of these companies, the wider challenge to adoption might be the transition to digital cinema projection. « There has been around $4 billion spent on digital cinema equipment around the world that is not producing a return on investment. Borrowing more becomes a problem,” MKPE Consulting principal Michael Karagosian recently said in an interview with THR.

Theater owners looking to offer Atmos will be able to upgrade existing systems by adding speakers and amplification. But the « average midsize » cinema auditorium, according to Dolby, can still expect to pay $25,000 to $30,000 for an upgrade.